Skip to content
Insights Illegal construction at Museum Lane 2a 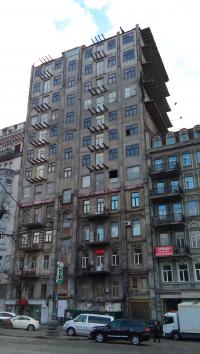 Jurvneshservice partner Anna Tsirat acted pro bono as Kyiv city council attorney at the Kyiv Commercial Court and the Kyiv District Administrative Court in claims against developer, who raised 8 floors illegally at 2-a Muzeyniy lane. This case is one of many others pending in the courts of Ukraine due to Kyiv mayor’s office activity aiming at stopping illegal construction in Kyiv and punishing transgressors.

The infamous building at the address 2-a Muzeyniy lane was being discussed in mass media since long ago. One of the historic buildings near the National Art Museum of Ukraine was converted into a gloomy high-rise monster: an original facade faded and lost its cared-for look, and instead of approved attic stories and mansard roof the developer raised arbitrarily 8 full-featured dwelling floors. Moreover, though the built floors were allegedly put into service 3 years ago the building’s appearance shows quite the opposite: laminboards nested in the window openings, rubbish left in the quadrangle, reinforcement steel sticking out in place of planned balconies…

Such bodacious disharmony in the architectural ensemble of the National Art Museum of Ukraine was intolerable so Kyiv city council filed a suit to the Kyiv Commercial Court claiming to pull down the floors raised illegally. But the Kyiv Commercial Court couldn’t render any judgment, provided there were permissions previously issued without proper legal ground by state authorities confirming the constructed object was inconsistency with the project documentation and urban planning legislation. That fact let to bring an action to the Kyiv District Administrative Court against the State architecture and town planning inspection of Ukraine and other state authorities claiming to recognize illegal and annul decisions on issuance of the certificates of consistency that served as a ground for issuance of titles to apartments on the floors illegally constructed.

On June 16 2015, the Kyiv District Administrative Court decided to annul certificates of consistency issued by the Inspection of architecture and town planning control in Kyiv and to cancel both titles to apartments on the floors illegally constructed and appropriate records on the state registry of that titles. Thus, the Kyiv District Administrative Court acknowledged the state authorities acted unlawfully while issuing to the developer the certificates of consistency concerning construction at 2-a Muzeyniy lane.

“I’m sure that is not our last win”, says Pavlo Riabikin, deputy head of the Kyiv city state administration who is responsible for fighting against illegal developers.

Now Dr. Tsirat is absorbed with the next step of the campaign pointed at victory in the Kyiv Commercial Court. This Court’s judgment ordering to pull down the illegally raised floors would revive the National Art Museum of Ukraine’s historic ensemble and central historic area of Kyiv.